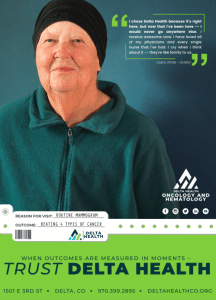 Delta, CO (March 8, 2022)– Each year in the United States, more than 1.6 million people are diagnosed with cancer. For Carol Spore, Delta County resident and Delta Health Oncology, Hematology and Infusion patient, that statistic became a reality when she was first diagnosed with breast cancer in 2007.

“My first thought [when I was diagnosed with cancer] was that I don’t want to die,” said Spore. “I have my husband, my daughters and my grandsons, I don’t want to die. But then, my next thought was if it’s my time to go then God has a reason, and that’s how I dealt with it.”

Spores’ battle with breast cancer was just the start of her journey. After chemotherapy and radiation treatments, and after almost 10 years, Spore’s physicians found a gray spot on her colon that was removed. After performing an x-ray, physicians found nodules on her lungs and she was diagnosed with metastatic breast cancer in February 2016.

“In the year of 2016, I had colon cancer, breast cancer and uterus cancer,” said Spore. “I had to have a hysterectomy and complete surgery in 2016. In the beginning, every time [my healthcare team] would call us, we’d say she’s going to tell me that I have cancer. That year was a rough year.”

Spore has received all of her care from Delta Health and says that she chose it at first because it was close to home, but now that she’s been treated at Delta Health she says she would never go anywhere else.

“I receive awesome care,” said Spore. “I have loved all of my doctors, and I’ve loved every single nurse that I’ve had. I cry when I think about it, they are like family to us. I would never go anywhere else – ever.”

Spore said she recommends Delta Health to everyone and that she considers her healthcare team as her second family. She said they try to do small things for them, but that there’s no way to repay them and to show the amount of gratitude she feels towards them.

“When we come to Delta Health, they care about us and our grandkids and there are times where I cry through chemotherapy and infusions and they just support me,” said Spore. “Every single nurse treats us the same and makes us feel special to them. We know they are family.”

“Carol has been part of our family here at Delta Health Oncology/Hematology and Infusion for quite some time,” said Nysha Wilson, RN, BSN, OCN and Director of Oncology/Hematology/Infusion. “We have shared laughter and many tears along the way. She has shown incredible strength and resilience. The love for her family and her drive to live is remarkable to witness. I feel incredibly blessed to be part of this journey with her.”

Spore also attributes her strength and resilience to her faith, but also to her husband and children. She recalled that her husband was at every single appointment with her and only missed a few. “She is a warrior,” said John Spore, Carol’s husband.

“I leaned on the support of my family, my friends and my nurses,” said Spore. “I remember one time my nurse told me that she knew someone that had cancer for 20 years and died from something else. It helped me realize that this cancer might not kill me, something else might. It helped me change my perspective, and I use it for inspiration that I might beat this and that in the end, I may die from old age.”

Spore is currently still in the recovery process and goes to her appointments once per week to receive treatments at Delta Health. She says she is still has a lot to live for.

Carol was born in Hotchkiss and grew up there before going to college at Colorado Mesa University. After marrying her husband the two moved to Gunnison where they lived for 35 years. They raised both of their daughters there before moving back to Hotchkiss to take care of their fathers. They are now retired and have a 20-acre farm that they get to enjoy. Carol has flower beds that she enjoys tending to and she enjoys spending time with her family.

“My story isn’t amazing,” said Spore. “I am just moving from day to day. I have been through a lot and sometimes question why me, but then I think, that isn’t for me to ask. It’s for me to keep pushing forward.”

To learn more about Delta Health Oncology and Hematology and Infusion departments, visit deltahealthco.org or call 970.874.6447.

Not finding what you need?

Contact us by calling our main office or fill out the form below.